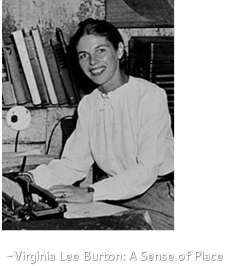 On August 30th 1909 in Newton Center, Massachusetts, the world welcomed Virginia Lee Burton to parents, Lena Dalkeith Yates and Alfred Edgar Burton. She was half Polish from her father’s side and half English from her mother’s side. She was the middle child of three children, but also had half-brothers from her father’s previous marriage. Virginia seemed to get her creativity from her mother who was described as an eccentric woman who took various names over her lifetime. In fact, Lena’s middle name, Dalkeith, was apparently borrowed from a village near Edinburgh.[i] By the time Lena was twenty, she had published many children’s books[ii], so it is no wonder Virginia followed in her mother’s footsteps.

Her childhood was full of folk songs, dancing, dressing up, marionette shows and books. Her father gave her and her siblings “beautifully illustrated children’s books” which he read aloud to them. Virginia claims these moments stemmed her interest in picture books[iii]. However, Virginia’s childhood was not always happy. Her mother (free spirit that she was) uprooted her children a few times and eventually abandoned them. Before her parents divorced and her mother left, they settle in Carmel, California[iv]. However, Virginia was described by her son Aris as having had a “natural affinity for life: bitterness had no role”[v] and therefore Virginia immersed herself in the arts. Her community growing up provided ample opportunities for her artistic talents and after high school, she attended the California School of Fine Arts on a scholarship after deciding not to go to college[vi]. She studied dance and art and design. Virginia had signed a contract to become a dancer with her sister but decided to stay and take care of her father after he broke his leg in a fall[vii]. Thanks to these unfortunate circumstances, Virginia turned from a dancing career to illustration. She moved to Boston to help her sick father and never left Massachusetts. The most influential career move was when she became the illustrator for the Boston Transcript newspaper in the late 1920s[viii].  She was a sketcher that accompanied the newspapers drama critic, where she was expected to capture the dancers and music on stage onto paper[ix]. A job she did quite skillfully. This job honed her artistic skills and specific portrayals of people and objects that would be known throughout her books[x].

Virginia’s talented nature attracted another talented artist, her future Greek husband, George Demetrios. He was a teacher, sculptor, draftsman, linguist and author about 13 years her senior[xi]. They met at one of Demetrios’s classes and married within the year and throughout their years together, she continuously used his artistic criticism to improve her own skills[xii]. After having their first son, Aristides Burton Demetrios a year later, they moved to Folly Cove, Gloucester Cape Ann and lived the rest of their lives in the house they bought there. This house originally stood on a noisy highway, specifically Route 127, but the couple had it moved to a beautiful knoll in an apple orchard where they landscaped it with flowers, stepping stone and a babbling brook. This movement was what inspired Virginia’s award winning picture book, The Little House[xiii]. Throughout their lives, Virginia and her family and friends were surrounded with music and art until finally she decided to add writing and illustrating a children’s book to her repertoire of skills.

Virginia’s first book, Jonnifer Lint, was denied 13 times by publishers[xiv]. When she tested out this denial by reading the manuscript to Aris, then three and a half years old, he fell asleep. This taught her the lesson that she described as “working with and for my audience, my own children,” her eldest son Aris and her youngest, Michael Burton Demetrios[xv]. I would tell them the story over and over, watching their reaction and adjusting to their interest or lack of interest and the same with the drawings”[xvi]. Although she was not published yet, her art style attracted the attention of an editor at Houghton Mifflin and this began her illustration career. Virginia illustrated based on her own experiences. An example was Sad-Faced Boy by African American author Arna Bontemps. Virginia took the experience of being snowed in one night in a little town and looking around to see this African American boy sadly looking out the window, as her model for Sad-Faced Boy due to the lack of African American boys around her home[xvii].

Years later, following the success of her first few books, Virginia became the mentor and unofficial leader of the Folly Cove Designers. The Folly Cove Designers was a group of neighbors that evolved into many highly skilled craftsmen who concentrated on textile designs[xviii]. The work Burton did in this group influenced the design elements portrayed in The Little House. Virginia thought about the idea for The Little House many years before she put it down on paper. In fact, one early sketch indicated that the original title was supposed to be “The Little Pink House”[xix]. She worked very hard on this book since it was so dear to her in reflecting her family’s home and the changes of the times. She wrote, drew, scrapped, asked, and redrew and rewrote constantly[xx]. Virginia used the whole book to portray her story[xxi]. The endpapers and the format of the pages were used in all her books and especially The Little House. Even the way the text is presented changed based on the different parts of the story. In the country it curves and flows, but in the city it is harsh and straight[xxii]. It is amazing all of the elements Virginia put into this book (as well as her others).

After the publication of her book Maybelle in 1952, Virginia did not write anything else until ten years later called Life Story [xxiii]. In this book she tells the story of the Earth from its beginning to present day, then takes the reader to the personal accounts of her life in Folly Cove. This was the last book Virginia completed. Virginia Lee Burton died at the age of 59 on October 15, 1968 from cancer. Her husband cast a nearly life-sized bronze statue of her, personifying her love of dance and life[xxiv]. Her ashes were spread on the land around her home, the place that influenced so much of her creative abilities. She may be gone but her work, influence, and spirit live on. The Little House has stayed in print since it was first published and it celebrated its 70th anniversary in 2012[xxv]. 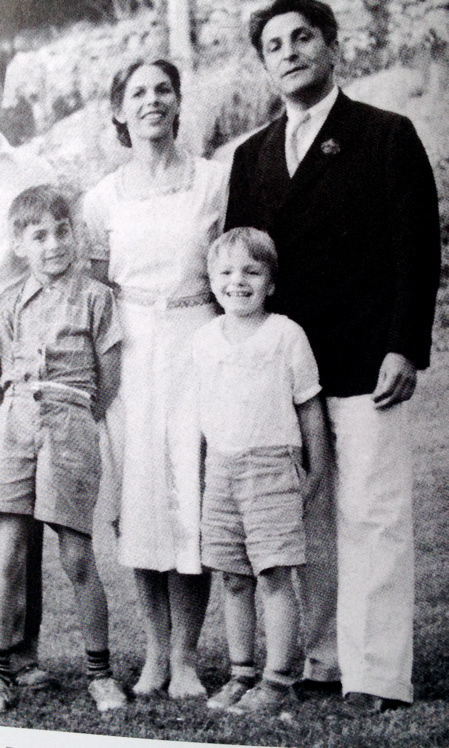